On Tuesday’s I cover various strategies for preparing for a coding interview job, and today I’m going to discuss how to answer the question of: what’s your greatest weakness?

To be 100% honest I’m not a huge fan of this question since it’s a lose/lose question: if the individual being interviewed is completely honest they probably won’t get the job, and if they give a flat out lie it will be evident very quickly. However throughout the years I have had several managers ask me this question, so it’s important to have a well thought out answer ready.

Since I’ve been on both sides of the interview chair, I have put together a list of the worst ways to answer this question and then some of the best answers.

Bad answers to your greatest weakness

Hard time saying no – this will say that you are weak and will take on too many projects, typically resulting in poor performance.

Can have a hard time staying on a single task – this means you should probably either learn how to focus or that you are supposed to be an entrepreneur, working for a company usually means long hours on long, repetitive tasks, and if someone is bouncing from project to project they’re not going to be a good asset to the team.

Can be arrogant – I had a professor in grad school, Dr. Richard Gelfond, who is one of the most brilliant computer scientists I’ve ever known, who said this about arrogance: “Being arrogant occasionally doesn’t matter, but it’s never good”. An arrogant employee won’t be able to work well with others and will have a hard time taking correction or learning anything new… because they already know it all.

Good answers to your greatest weakness

Can be slow to take action – this is an interesting answer because it could be a bad answer if you leave it at this since it might tell the interviewer that you are timid, which would be a poor character trait. However if you follow it up by saying that you are very detailed and that before you start a task you want to have a clear strategy for how to move forward, that is an employee I want to have on my team!

Can be overly critical on myself – this will tell the interviewer that you care about your work and that doing it well is very important to you. Make sure to follow up with how you’re working on yourself so that you still are working on being a craftsman at your work but to not get on yourself for irrelevant reasons.

Can be quiet – this is one of my favorite things to hear, assuming that the individual follows it up by saying that they can be quiet because he or she thinks that it’s important to listen to all of the details of a project or challenge before giving an answer. This tells me that the individual is going to be detail oriented and won’t miss key items because they were too busy thinking what they were going to say next.

I hope that these strategies help you answer the question of: What’s your greatest weakness? And good luck with the interview! 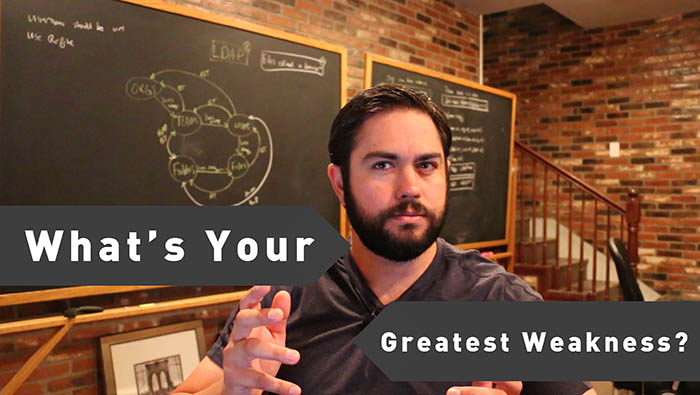