You’ve made through another week, and today is Freelancer Friday, where I discuss various strategies for managing a freelancing business, and today I’m going to discuss managing client conflicts.

It’s simply a matter of life and business that you will run into conflicts with clients, some of the most common confrontations seem to be:

None of these are fun to work through, and most of them can be avoided if the proper care is taken at each stage of the project management process. However I want to discuss what happens when conflicts occur and how to best manage them.

First and foremost, do not let emotions take over. This is probably one of the hardest ones for me because I love what I do and when bad things happen in a project my first response is to get defensive, which is one of the worst responses to have. So when I see an angry message come through from a client or take a phone call I make sure that before I respond I sit back and try to look at the situation from the client’s perspective.

It’s pretty rare that a client will get upset for no reason, the majority of people are rationale and they prefer to stay away from confrontation, so if the client is mad there is probably a legitimate reason for it. Therefore the first step I take is pretending that I’m the client and then I feel like I can give a better response from that perspective. If a project went over budget and I’m imagining that I’m the client, I can understand why they’re not happy – because I don’t like spending more money on something than I originally was told it would cost.

So instead of responding with a defensive messages, such as:

“It wasn’t my fault, you were the ones that changed the scope”
“I can’t control that the fact that the designer took twice as long to deliver the mocks”

I’ll start with saying things that show that I understand their perspective, for example I’ll say:

“I completely understand how frustrating it is, the project scope has grown and it’s been hard to meet all of the requirements based on the original timeline”
“I am sorry, I should have allotted more time for the design phase, it’s my fault and I will work to get it taken care of”

If you pretend that you’re a client hearing those four responses, which ones would put you more at ease? The ones where I was defensive and tried to blame everyone else or the ones where I took responsibility for the project and gave a calm reply back?

The easy thing to do in a confrontation is to become defensive or respond back aggressively, however neither of those approaches will fix the issue and they’ll most likely make things worse. Your first goal when a conflict arises between yourself and a client should be to see if you can see the issue from their perspective.

With all of that being said, there will be times where the core problem is the client’s fault. They may be very bad at stating project requirements or they may simply be poor communicators. I once had a client who hired me a few years ago and asked me to build an application and they simply gave me about 4-5 screenshots from another website and then they completely disappeared. I did my best to build what I guessed they wanted and I sent daily updates to them, and then a month later he messaged me furious that the app wasn’t what he wanted and then went on to list all of the features it was missing, even though they were features he had never asked for originally. I calmly fired him as a client on a spot and informed him that I wouldn’t be able to work on the project any longer. I didn’t raise my voice, I didn’t explain how he gave me little to no guidance for building the app, but I knew it wasn’t the type of client I could work effectively for.

I hope that this has been a good set of tips for how to manage conflict with your clients. I did quite a bit of research on this post prior to publishing it to see if there were any things that I was missing and I discovered a full library could be made out of the information based on conflict resolution. There are discussions about personality types and more acronyms than I care to list out here, however what’s I’ve published here is what I’ve used throughout the years and it’s worked very well for me through a number of challenging situations and many different client personality types and I’m confident it will work well for you and your clients. 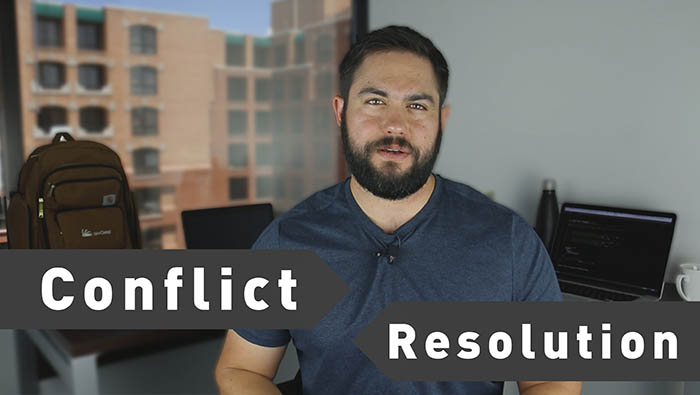