Congrats on making it to Friday, for my episode at the end of each week I like to cover topics related to being a freelance developer and today I’m going to discuss the top project management tools I’ve used on coding projects.

In preparing for this post I went through some directories that listed all of the known project management software applications on the market. To be 100% honest, I was a bit shocked. There are literally thousands of project management options available to freelancers. Thankfully I’ve been able to work for a number of clients and worked with various project management apps through the years. For this post I want to give you a list of the top project management tools along with their respective strengths and weaknesses. With this knowledge you can decide on which one is the best fit for your project and freelance business.

Also, if you’ve had a good experience with an application that I don’t mention, please let me know in the comments section. I’m always testing out new tools so let me know if you have any recommendations.

The following are six of the top project management tools that I’ve used. I’ve probably used around a dozen tools, however I only wanted to list applications that: 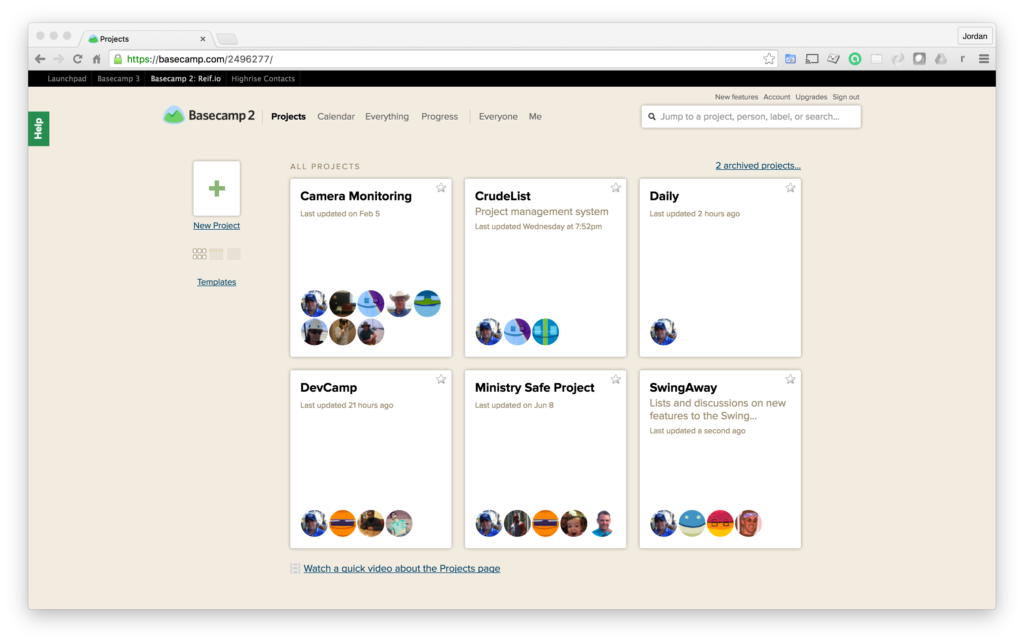 My favorite application for project management is Basecamp. I’m probably partial to it since its founder, David Heinemeier Hansen, also happens to be the creator of the Ruby on Rails framework that I use daily. With that being said, Basecamp has a clean interface focused around todos and messaging. Here is a set of the todos assigned to me and various devCamp team members right now: 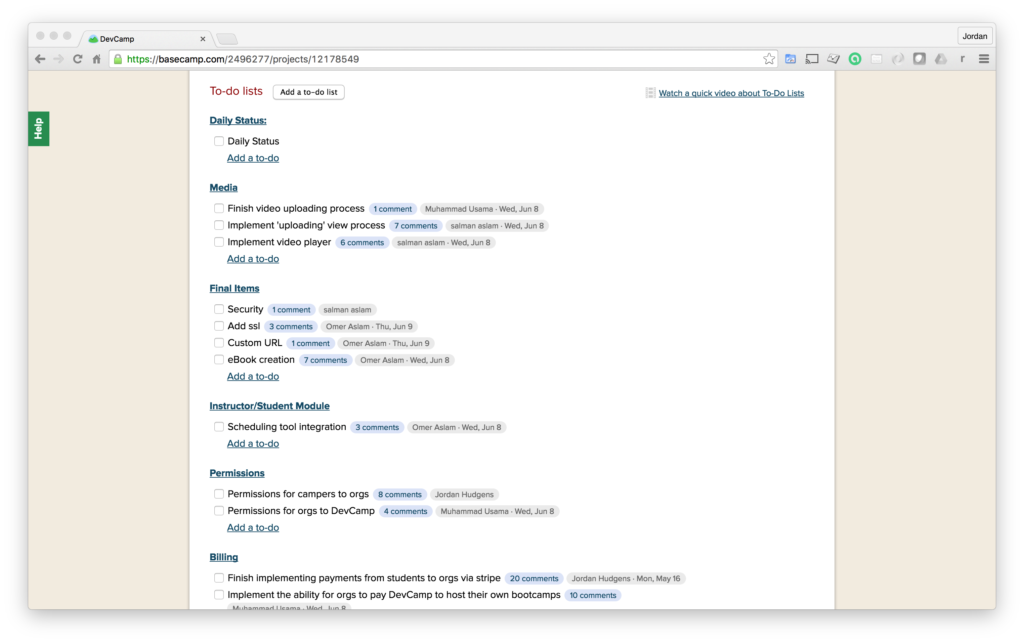 In addition to project management I also use Basecamp as my daily planner. Essentially I move each of my todos from one day to another. I like how I can have a number of my projects and their respective todo lists all shown on one page, as shown here: 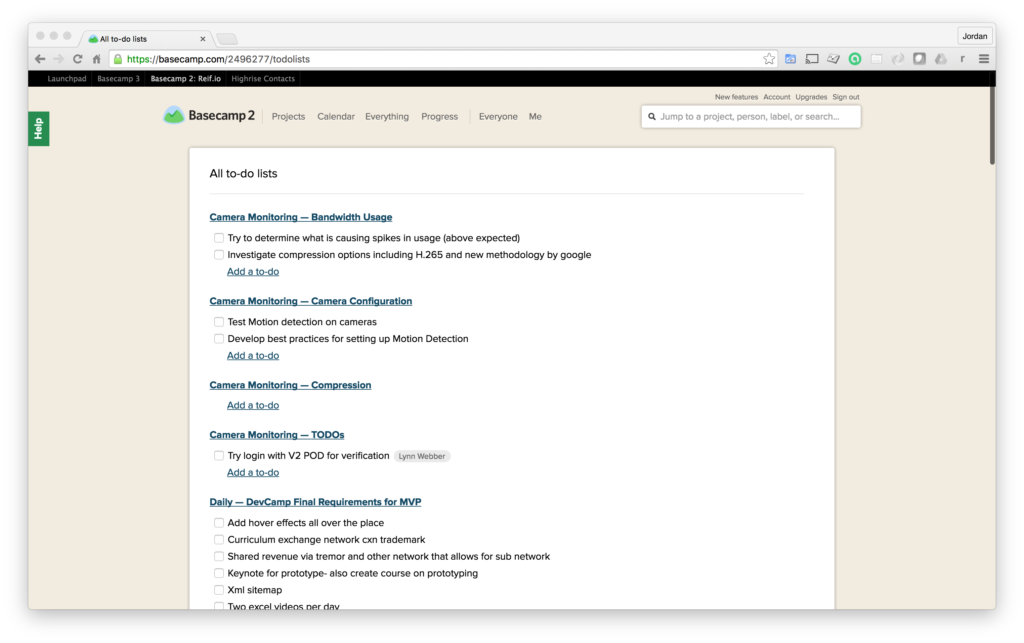 And for when I’m wanting a filtered list of what is assigned to myself, I can see only the projects that I’m tagged in as the owner: 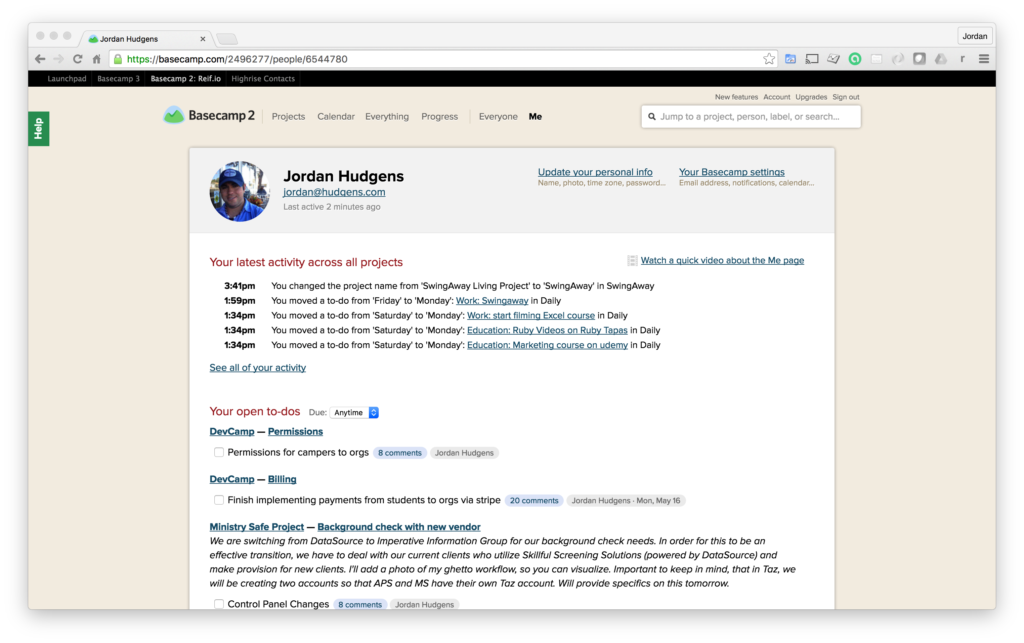 For the negatives to using Basecamp, depending on your prior experience with project management software, Basecamp may not feel very natural. If you’re used to dashboards based on gannt charts and similar tracking mechanisms, Basecamp will take some getting used to. It does have the ability to have all of those features via their add on module, however at its core Basecamp focuses more on messaging between team members, todo lists, and scheduling.

Basecamp also doesn’t have the best suite of mobile options, I have its iOS app on my phone, however it’s not the most intuitive, especially when compared with a few of its competitors such as Trello.

With that being said, Basecamp is still my go to choice when it comes to project management software due to its simplicity, speed and because I’m drawn to its to do list structure. 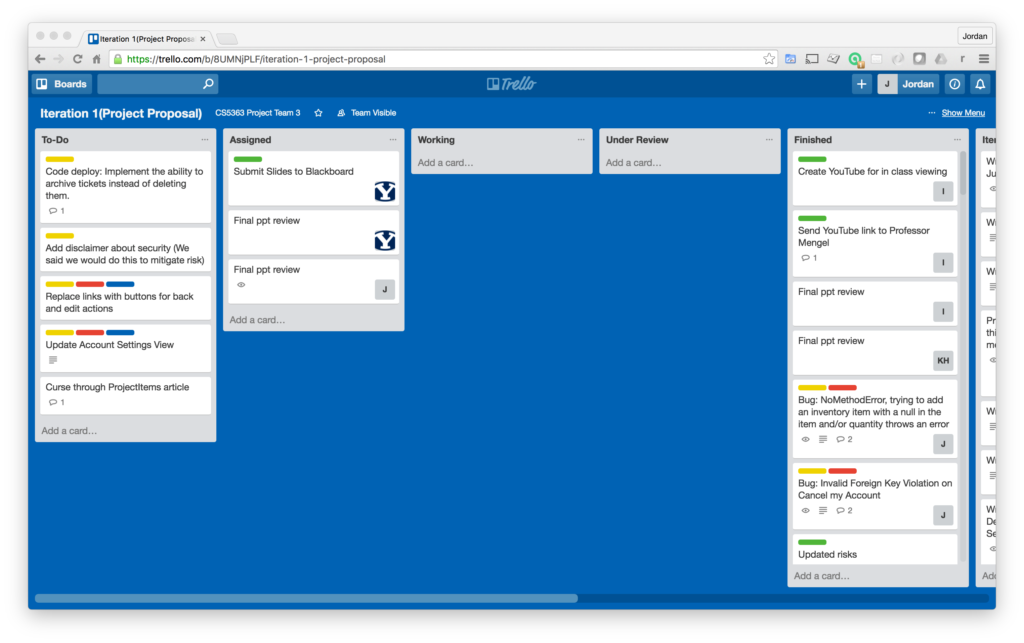 Another great tool that I’ve used on a large number of projects is Trello. Trello utilizes a kanban style of project management. Kanban is a workflow popularized by lean manufacturing proponents and at a high level it uses the concept of moving ‘cards’ through different stages of a project’s development until they’re complete.

Trello essentially gives you a virtual kanban board and lets you move tasks through each stage of the product development lifecycle. For example, here in the image I would move a task from being a ‘to-do’, to being ‘assigned’, to ‘working’, to ‘under review’, and finally to ‘finished’. 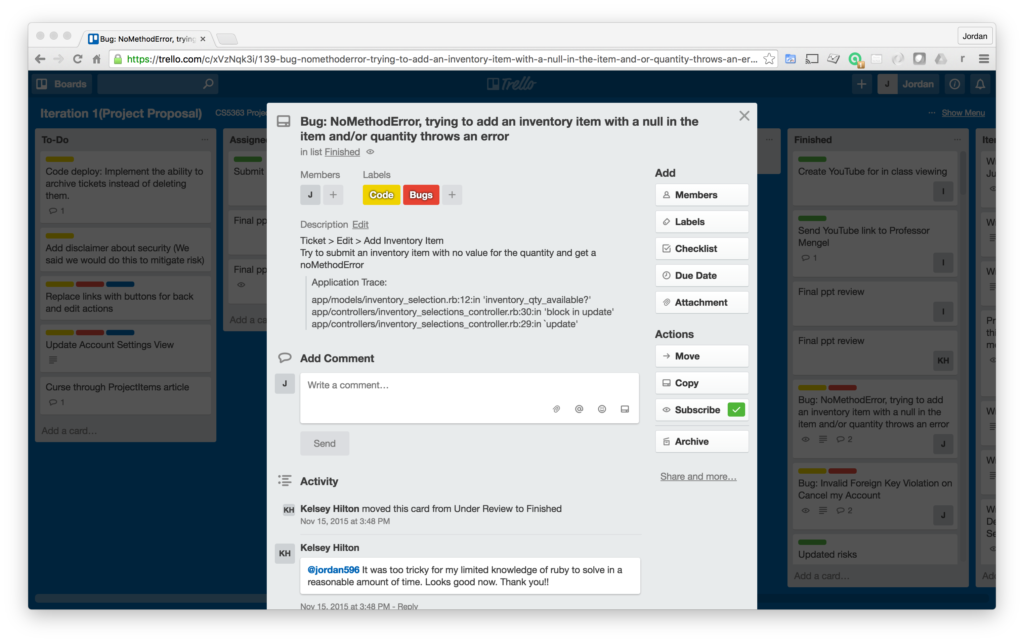 This approach makes it straightforward to visualize each each task that’s assigned to you and it also has a good interface for managing a team of developers. 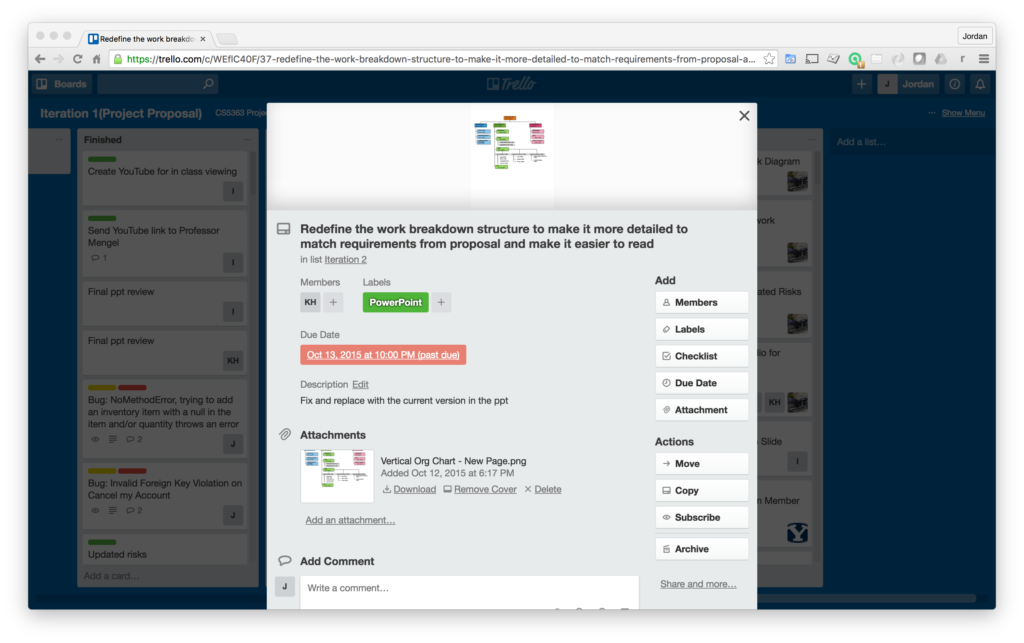 I also like how you can add images and attachments to tasks, which lets you encapsulate all of a task’s conversations, data, and statuses in a single screen.

Another bonus that Trello offers is that it works nicely on smartphones and tablets, so it’s easy to track the progress of applications when you’re not at your desk.

Trello has worked great for me on small to medium sized projects, however for large projects or complex applications I’ll usually opt for Basecamp or the next one on the list: LeanKit. 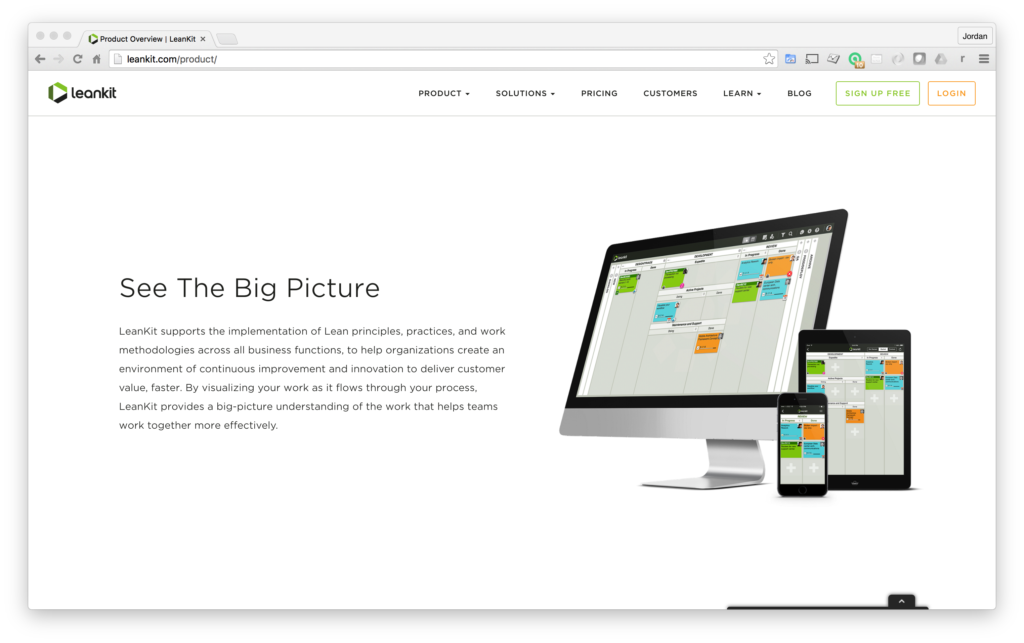 When I was managing an entire IT organization, LeanKit was the software I went with for tracking the projects that were being worked on. It doesn’t have the attractive user interface that Trello offers and it takes longer to learn. However it worked quite well for me when I was managing very large scale projects, such as enterprise application rollouts to 800+ employees.

Much like Trello, LeanKit utilizes the kanban strategy of project management, however it focuses more on enterprises compared with smaller teams. The mobile and tablet applications offered by LeanKit were intuitive and helped me to manage projects even when I was traveling, which was a nice bonus.

LeanKit’s strength is in how well it allows you to nest and organize projects and subprojects. After you’ve learned how the system works it’s relatively straightforward to manage large teams.

One of the biggest negatives of LeanKit was something that I considered very odd. They have a pretty archaic method for payment that requires quite a bit of manual work. I remember times where I was forced to contact the company via email simply to add new users to our account plan. This wasn’t a deal killer for me, however it does make it a poor choice for freelancers who want to work multiple projects from the same account. 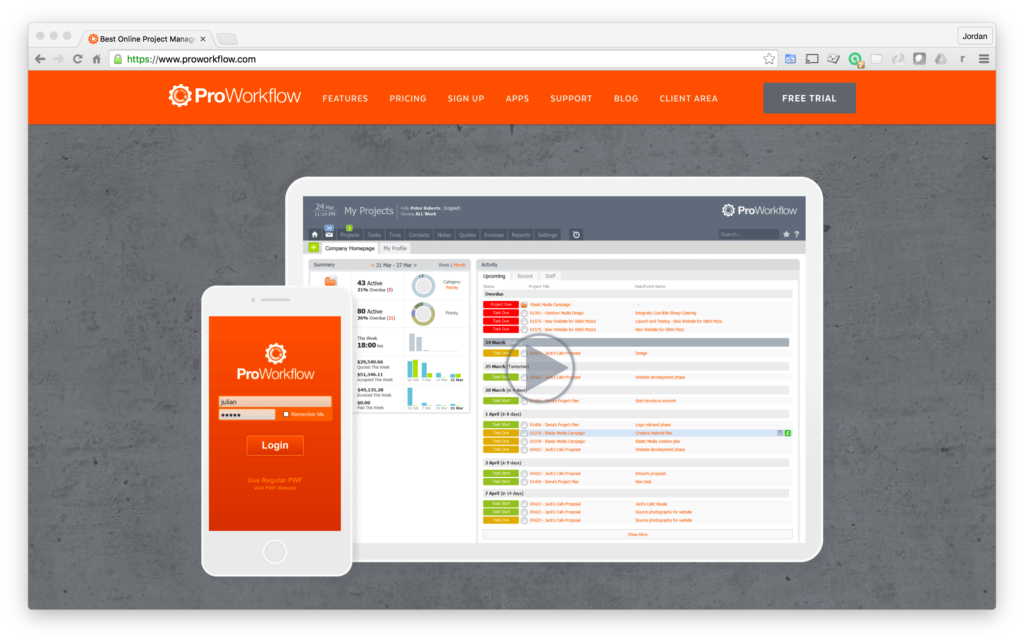 I only worked one project that utilized ProWorkflow, however it was a good experience and I didn’t have any complaints with using the software.

I have a bit of a love/hate relationship with Wrike as a project management tool. If you’re managing a team of developers Wrike is a great application to use. As a project manager you’re able to use it to see the status of each project along with detailed analytics for every task that is being worked on.

However if you are a developer working on Wrike there is a pretty steep learning curve. I would like to think that I’m pretty adept at understanding how to use a new piece of software. However I kept getting lost in Wrike’s dashboard and had a difficult time finding where to post updates to clients. Eventually I asked the client to go through a screen sharing session where we walked through each dashboard that I would use.

With all of that being said, Wrike is a good option if you’re managing a team of freelancers on multiple projects and that’s why I put it on this list. 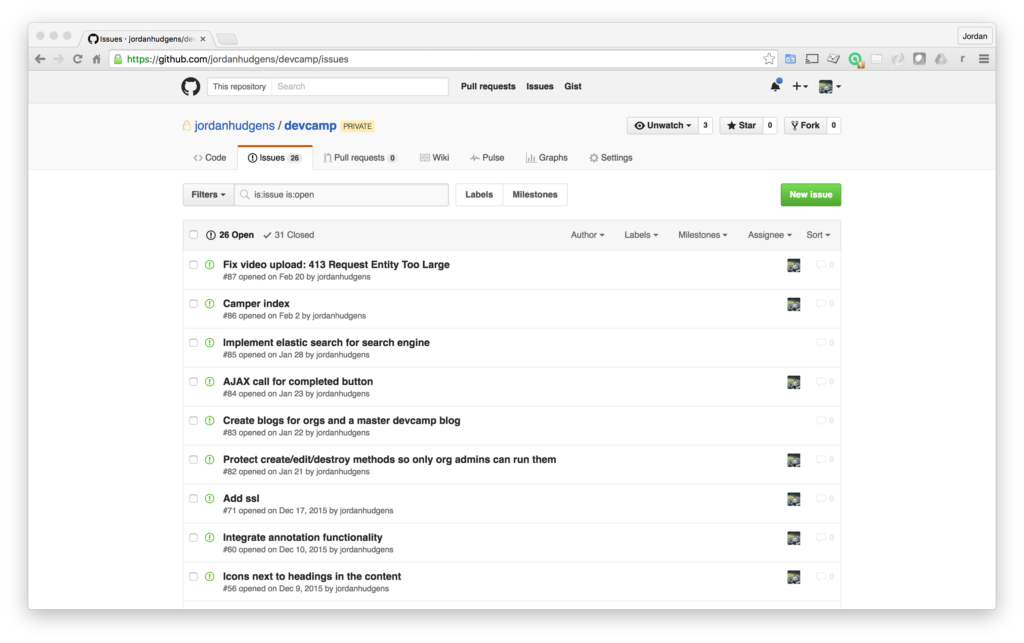 This may seem like an odd option to put on a list of top project management tools since technically GitHub doesn’t market itself as project management software. However when I’m working on a project that only has developers I’ve found that using GitHub’s issue tracking module doubles as a project management tool. And it makes sense since some of the largest frameworks and languages are open sourced projects that base all of the tasks on issues and features that can be easily tracked on GitHub. 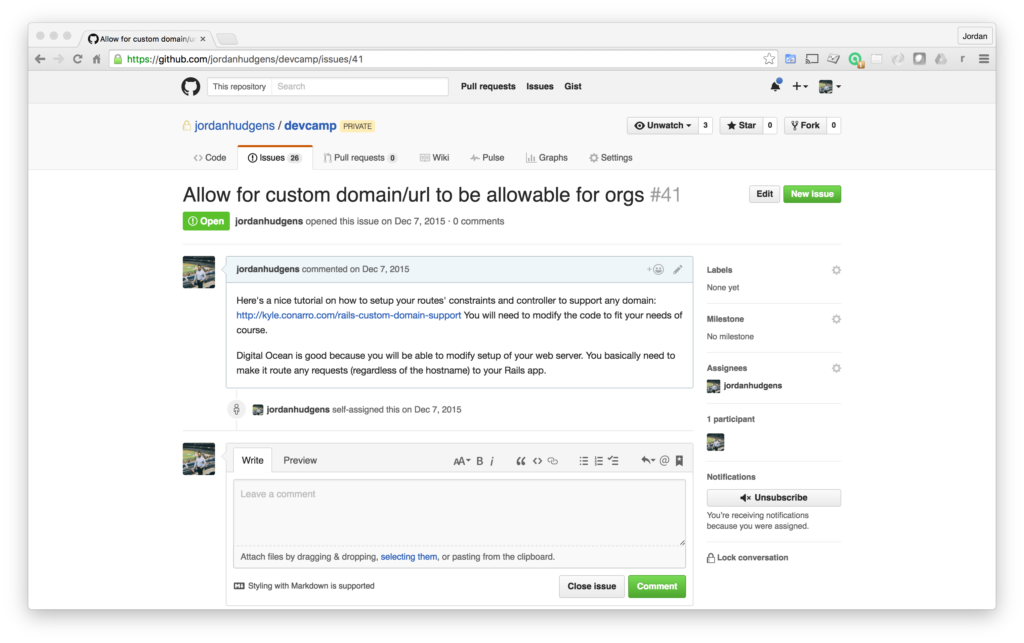 As you can see in this screenshot of a specific issue you’re able to:

Additionally, with an experienced development team, using GitHub to manage a project has the added benefit of making task management efficient. For example, developers can close tasks automatically based on git commits. And the easier you make a piece of software to use, the more development teams are going to like it.

I hope that this has been a helpful list of the top project management tools that you can use in your development projects and that it will help you decide on what software to use on your next project!