When it comes to working with abstract data structures there are two components that need to be understood: Queues and Stacks. In this guide walks through understanding the Stack data structure.

Stacks work in the exact opposite way that queues do. In algorithm terminology stacks follow the Last In First Out (LIFO) data flow. This means that the last item added to the data structure will be the first element removed. 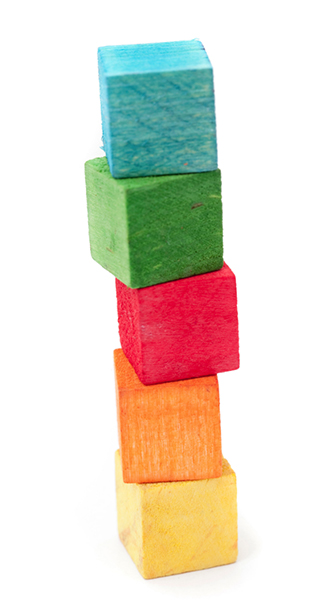 You can think about how this works by considering a tower of blocks. Each time you add a new block to the pile it goes on top. If you want to remove a block you can only remove the block on the top of the pile since that’s the only one you have access to.

For our code example we’re going to use the Scala programming language. However when it comes to working with abstract data types such as Stacks and Queues the language itself is not important.

In Scala we can create a new Stack structure with the following command:

Running this command in the Scala Repl environment will create a stack with the String data structure and will return the following:

Adding to the Stack

Like our example we’re going to add blocks to our stack. We can add a single block by using the push method:

If you run this code you’ll receive the following output:

We can add some more blocks with the commands:

This will add two more blocks to the stack.

We can see all of the items in the block stack by running the command:

This will output the entire structure and its contents:

Removing Items Off the Stack

It will output the following:

This is good since the Green Block was the last block we added to the stack.

I you run the stack pop command it will remove the Blue Block. And lastly if you run stack one more time it will show that the structure only  has the Red Block, which was the first one added.

This structure is quite simple, which is one of the keys to an abstract data structure. Stacks need to be straightforward and only perform a few key tasks such as adding and removing elements.

The behavior of stacks and queues may seem incredibly basic. However you’ll discover that when you’re working with algorithms that utilize data structures, all of your programs will follow either the pattern of a stack or a queue. Which is why it’s critical to understand how they perform.